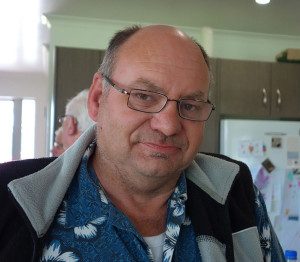 My name is John and I have had epilepsy since I was born. I was teased growing up and so I was moved away from the local school because children would chant “Epie! Epie” as I had tonic clonic and complex partial seizures. I had no friends growing up, I felt really isolated and I left school after the fourth form to work in the Holeproof factory as a storeman. I happily worked there for about six years, until the factory closed down.

I took Dilantin and Mysoline (anti-epileptic medication) until I was in my 20s and then my medication was changed to Tegretol. That medication change stopped my tonic clonic seizures but I continued to have complex partial seizures. I still have these seizures and I can walk for miles without knowing where I am going and then I am confused, as I have no memory of getting there, which can be worrying.

In 1977, I was employed by the city council as a storeman/labourer. I enjoyed this job, as it gave me a sense of worth, and I worked there until 1991 when my seizures were considered a danger to myself and to others. I had to seek advice from my doctor and, because of that report, I was pronounced unfit for work and I was ‘medically retired’. Although my doctor suggested that I could continue to be employed in light duties, I never had the confidence to apply for further work. I have been living on an invalid’s benefit ever since because my complex partial seizures are uncontrolled and I work in a sheltered workshop alongside other people with disabilities.

Since I have started attending courses and meetings, held by the Epilepsy Waikato Charitable Trust (EWCT), I have grown in confidence. I don’t broadcast that I have epilepsy but I am not as shy as I used to be about talking about it. I recommend that everyone should join a social group like EWCT’s Epilepsy Club, because you don’t have to feel isolated as I did growing up. I have learnt to deal with my seizures and the effects of my medication but I do enjoy the other parts of my life. I enjoy gardening, reading, keeping up with world news and meeting up with friends.